As you may have read in my review of my recent trip to Dubrovnik, I spent one day of the holiday on a day trip to Mostar in Bosnia.

Like Croatia, Bosnia is still recovering from the after effects of the war which ravaged the region in the 1990’s. Unemployment is extremely high at approximately 40% and it appears that their only real industry is tourism, which is thankfully increasing year on year. The old city is now also UNESCO world heritage listed.

The tour bus picked us up from near our hotel and drove us across the Bosnian border into Mostar. We stopped a couple of times on the way for photo opportunities and bathroom breaks, but the drive can’t have lasted more than a couple of hours (bar the long wait at border control).

Once in Mostar, we were met by a local guide who told us all about the history of the city and walked us through the town, stopping at famous landmarks. The first thing I noticed was how much pride Bosnians had in their country. Back in Croatia, another guide had told us that no one had actually wanted the war, except for a few selfish leaders. That meant that when the war took place (and a couple of natural disasters) rather than fighting internally over who was a Croat, who was a Serb and who was a Bosniak, the strength of human compassion took over and everyone helped one another.

The current states of tolerance in Bosnia was evidenced in the proximity of the three major religions. While Bosnia is predominantly Muslim, mosques, churches and synagogues all lie side by side in Mostar and everyone worships in peace.

As we walked around, we could see the evidence of the recent war in the damage inflicted on historical buildings. Many buildings and landmarks are still being renovated, but as this is an expensive process, you can still see bullet holes and shell marks in the walls.

Our guide also told us some cute things about the city. Every year Mostar has a chocolate festival, where residents bring some chocolate and have to give it to a person they don’t know. This is done to foster good relations and to encourage people to form new friendships. Mostar also has a university, but due to the fact that many people cannot afford the living expenses (and the unemployment being high), accommodation in certain halls of residence is free provided that students work in local ‘soup kitchens’ and help to feed the homeless.

The poverty problem in Mostar was very evident, as many children and adults approached tourists begging for money. We were encouraged to keep an eye on our belongings as a result, but I do have to say that it was very difficult to see such small children on the streets.

As part of the tour, our guide took us to see the Old Bazaar and a mosque. Bosnia had been taken over by the Ottoman empire in approximately 1451, which could still be seen from the architecture of certain buildings that had survived the war.

The highlight of the trip however, was a visit to the Old Bridge (aka Stari Most). The Old Bridge was destroyed in 1993 during the war but had originally been built in the 16th Century by the Ottomans. The bridge was rebuilt and reopened in 2004 and has now clearly become the symbol of the city. The views are stunning in every direction, whether you’re underneath the bridge or crossing it.*

For me, seeing this alone made the entire trip worthwhile. If only the tourists had all disappeared, it would have felt like I had moved into a magical land full of unicorns and fairies. Have you ever seen water this colour before?! 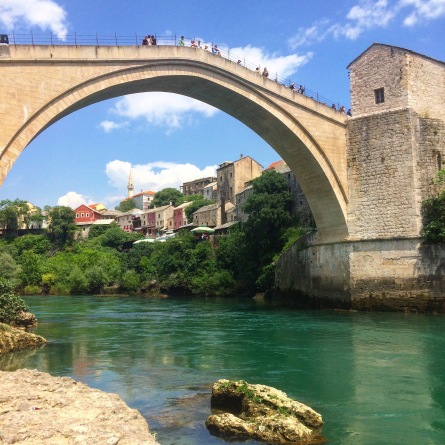 The rebuilding of the bridge sparked a new craze for the residents of the city. Every year there is an annual diving competition from the top of the bridge into the water below. This has apparently been going on since the 1600s and is very dangerous because of the ice cold temperatures of the water. In fact, while we were there divers were collecting money from tourists and once they had enough, they would dive from the top of the bridge for entertainment. While it was incredibly hot in Mostar (it being the hottest place in Europe due to its valley location), I still would not have attempted this feat..!

The final stop on the tour (which lasted approximately 1.5 hours) was at the Turkish House. This is the best example of Ottoman architecture in Mostar as it is so well preserved and authentically decorated. The house was built in the 17th Century and now serves as a museum, with a small entry fee of €2.

After the tour ended, we were left with an hour and a half to explore the city as we pleased. We headed for some lunch to one of the many cafés along the Old Bazaar, Rota. Here we sampled some traditional Bosnian cuisine which was absolutely delicious. The foods that Bosnia is most famous for are burek, a pastry case filled with either meat or soft cheese (similar to the Turkish borek) and cevapi, a minced meat sausage.

At Rota, we opted for a meat platter which came with sausages, cevapi, grilled chicken breast and kebabs. This was served with hot, salted Bosnian pitta bread (more of a mixture of regular pitta and naan), mustard, onions and cream. The meat was incredibly tender and succulent and the whole meal was very cheaply priced. This was hands down the best meal I had during my trip to Dubrovnik & Mostar.

So, if you’re planning a trip to Eastern Europe, make sure that you set at least one day aside for a trip to Mostar! The people are wonderfully uplifting and friendly, the views are spectacular and the food is fantastic. What’s not to like?

For the time being it still remains relatively untouched by tourists but I don’t anticipate that this will be the case for long. If you can, a visit to this country before it becomes overly commercialised is an imperative for any travel-lover! As someone who is now quite familiar with the vibes of the Scandinavian and Mediterranean countries in Europe, I can say that the atmosphere of this country is like nothing I’ve felt before.

* make sure you wear shoes with good grip – the smooth stones on the bridge and throughout the Old Bazaar were very slippery and people kept falling over!