Ever since I got my British Museum membership, I have been making an effort to attend every new exhibition they put on (although, it really doesn’t take much effort).

After ‘The American Dream: pop to the present’ exhibition earlier this year proved to be a little too long to remain interesting (at least, for me), I was waiting with baited breath for the opening of ‘Hokusai: Beyond the Great Wave’. I travelled to Japan in March this year and had one of the best trips I have ever taken. Unfortunately, Ginny (my  Japan travel companion) and I didn’t really get the time to see much art so, when we heard about this exhibition coming to the British Museum, we arranged a Japan reunion date!

If you have a membership card, you can waltz straight into any exhibition without booking, even if that particular slot is sold out. If you don’t have a membership, I would definitely recommend advance booking through the British Museum’s website to avoid disappointment. Ginny and I had to end up greasing a few palms by buying an additional membership just to get in!

Hokusai was a Japanese artist, who was born in Edo (now known as Tokyo) in 1760. He is one of Japan’s most famous artists, having produced some of the most influential pieces in art history. This exhibition chronicles the last 30 years of his life and work, during which he struggled with notions of perfection and immortality.

Hokusai had many names during his life, changing them as he entered a new phase or age group. He was known as Shunro, Sori, Kako, Taito, Gakyojin, Iitsu and Manji but most famously known as Hokusai, which is how I will continue to refer to him. Hokusai worked in Ukiyo-e, which is a genre of Japanese art made up of paintings and woodblock prints. Ukiyo-e typically depicts sumo wrestlers, geisha, nature and kabuki.

Hokusai’s artistic career spanned almost 80 years; however, he started by working as a delivery boy and apprentice woodblock cutter. This armed him with the basic skills of his trade and in 1778 (as a teenager), he began his training with a famous Ukiyo-e artist called Katsukawa Shunsho. Shunsho focused mainly on theatrical pieces and as this could not keep Hokusai interested for long, he eventually moved on to pursue his own style. He spent some time illustrating for books before moving into more naturalistic images of people and nature.

There is so much to say about a life spanning almost 90 years that I won’t attempt to cover his career any further; however, I will comment on my favourite pieces in this exhibition. It was fascinating to see the evolution of Hokusai’s artistic style through his life, ranging from the ‘One Hundred Ghost Tales Series’ to ‘Chinese Hero in the Snow’, ‘Gamecock and Hen’ and ‘Herbaceous Peony and Canary’.

Hokusai experimented with more European styles after commissions from The Dutch East India Company in around 1822-1826. My favourite, ‘New Year Scene’ depicts a samurai dressed in formal clothes, making a New Year’s visit. The highlight of this piece are the two dogs sniffing one another in the foreground. Unfortunately, I couldn’t find an image of this piece anywhere but here is a similar piece called ‘Year-end Accounts’, which depicts the style: 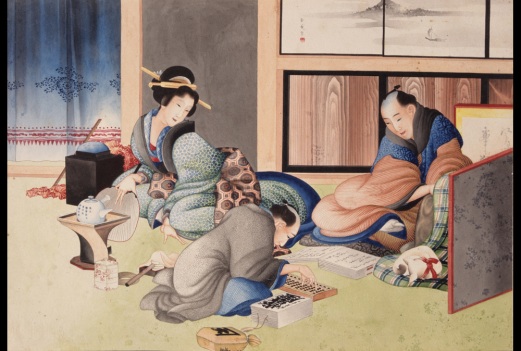 Another series which really stood out to me was called ‘A Tour of the Waterfalls of the Provinces’, which was completed in around 1834. My favourites were ‘Carp in Waterfall’ (which may have fallen outside of this particular waterfall series) and the image below, called ‘Kirifuri Waterfall’. 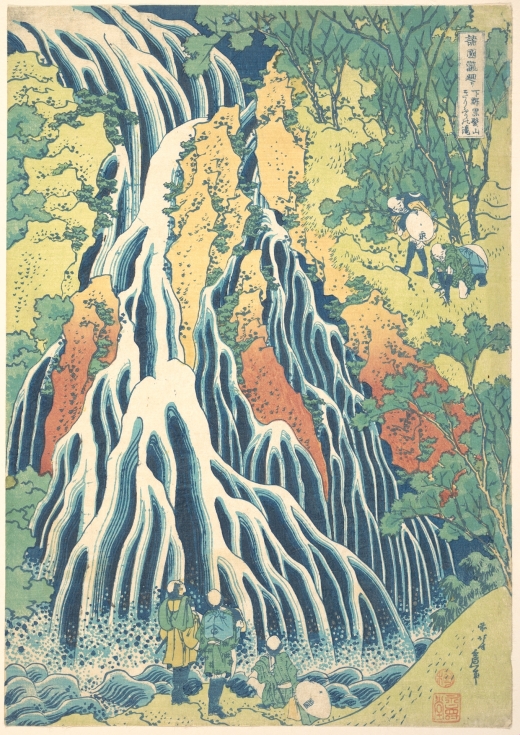 Although this exhibition encourages you to look beyond the Great Wave, it is undoubtedly his most famous piece and one you will know (without even knowing that you know) if you’ve ever used the wave emoji! The Great Wave was part of a series called ‘Thirty-Six Views of Mount Fuji’, which reflected both the spiritual significance of the mountain and the culmination of the techniques Hokusai had learnt.

Japan was sealed off from the rest of the world during the Edo period, which meant that the Japanese were not allowed to travel outside of the country. In order to keep the Japanese happy, the emperor imported produce from other countries and one of these imports was ‘Prussian blue’. This pigment first entered Japan in approximately 1820 and became a huge feature of Hokusai’s work – most notably, in the Great Wave.

The ports were opened for foreign visitors in 1859, which meant that Hokusai’s work was suddenly also being recognised in the West – even by artists such as Monet and Van Gogh. Van Gogh, in particular, remarked the following upon seeing the Great Wave, “These waves are claws, the boat is caught in them, you can feel it.”

What is sad is that Hokusai never realised the level of his talent. As he reached his last days at the age of 88, he commented, “If heaven will afford me five more years of life, then I’ll manage to become a true artist.” Hokusai’s obsession with immortality came to nothing in physical terms but, in terms of his legacy, he will certainly live forever.

This exhibition is worth the hype, so make sure you catch it before it ends! If you want to know more about Hokusai’s life but you can’t make it to the exhibition, the BBC have put together this documentary and there is also a great podcast on ‘Stuff You Missed in History Class’.