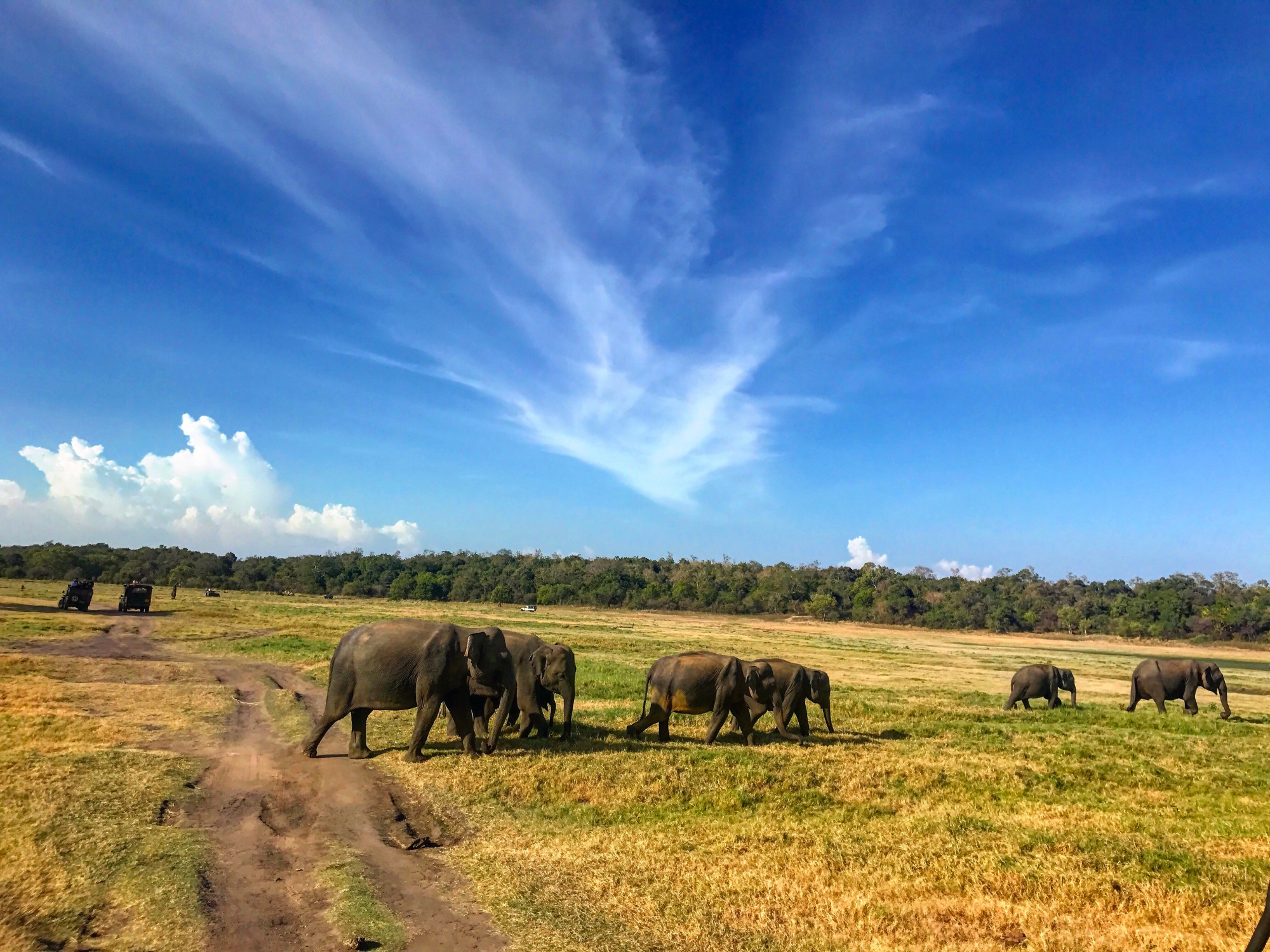 Back in June, I took a once in a lifetime tour around Sri Lanka with my family and a group of family friends (including Patch). The tour was run by a company called Connaissance de Ceylan, which organises bespoke private tours in a range of different lengths. Our tour was 10 days including travel, which I felt was just enough time to see the main sights.

The journey was a fairly arduous one – a 16 hour plane journey with two stop overs in Istanbul and the Maldives. Upon arrival in Colombo, Mansour (our tour guide), his driver and his assistant met us with beautiful flower garlands and joyous cries of ‘Ayubowan!’ (meaning ‘hello’ or ‘welcome’ in Sinhalese).

We then filled up the minibus, which was to become our home for the next 10 days, and made the 4 hour drive to the Aliya Resort in Sigiriya. This resort, which is named after the Sinhalese word for elephant, is absolutely stunning. It has wide open spaces, uniquely decorated rooms, roaming wildlife and an infinity pool looking out to Sigiriya Rock. 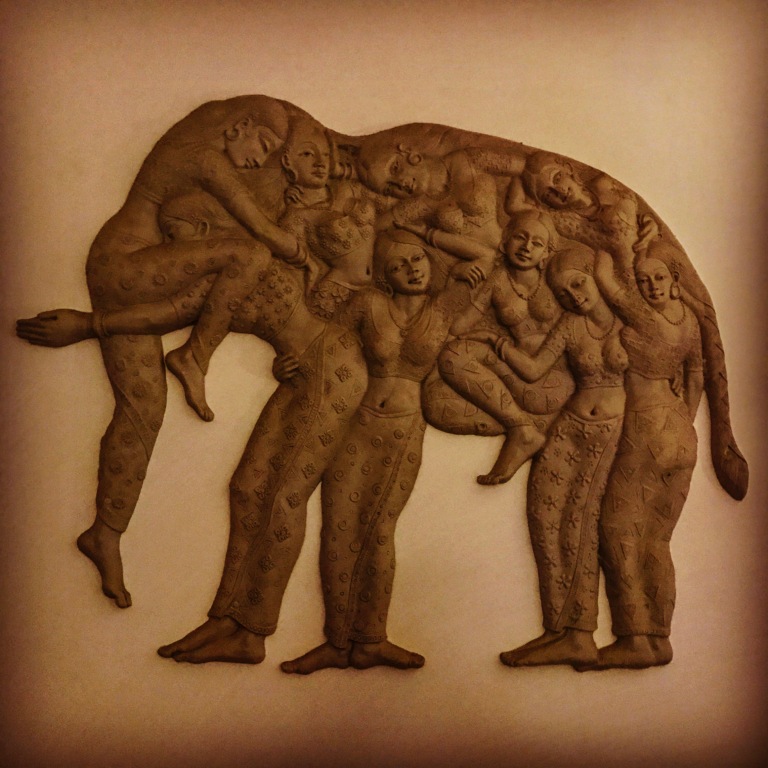 The next morning, we woke to the sweet scents of sandalwood and jasmine and the sound of tropical birds singing their morning songs. Sri Lanka is close to paradise, with its lush green vegetation, flowing crystal waters and glorious sunshine.

I started the day with a traditional breakfast of egg hoppers, which are essentially dosas made with coconut milk, topped with an egg. 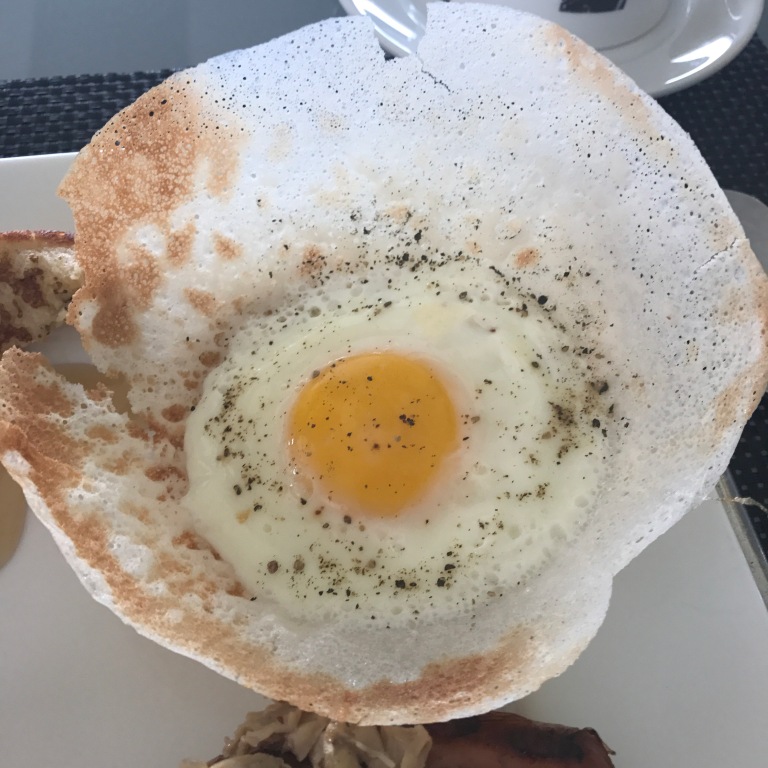 We opted for ‘half board’ in all of the hotels during our trip, as we would spend most of our time on ‘activities’ and it took the stress out of finding places for dinner each night. The buffet at Aliya Resort served traditional Sri Lankan food and was different every day, so we never got bored of the meals!

We made sure to load up on carbs on that particular morning, before we tackled the hike up Sri Lanka’s famous landmark, Sigiriya Rock. 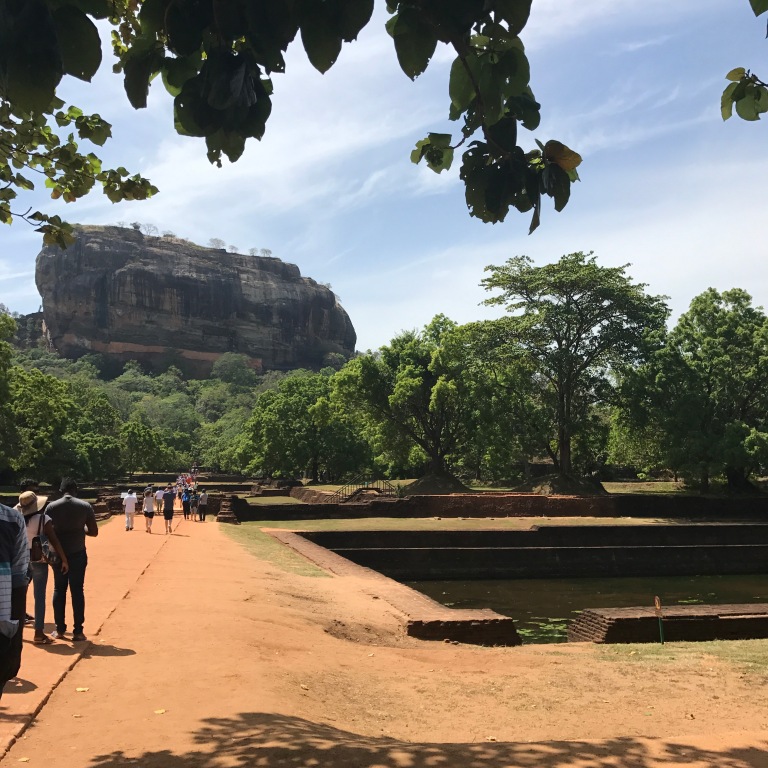 This climb was manageable but, bearing in mind that there are over 1,000 (not always level) steps to the top and around 36 degree heat during the summer, it was not one for the fainthearted. If you are super fit, you could probably make it to the top in around 45 minutes but my group (minus the older members) took around 1h15 with regular photo and water breaks.

According to Mansour, Sigiriya Rock was turned into a fortress by a king called Kashyapa in around 477 CE. Kashyapa was escaping his brother’s wrath after killing his adoptive father for inheritance. He built a moat around the fortress and filled it with crocodiles – in fact, the descendants of these crocodiles still live in the moat today! The grounds around the rock were turned into water gardens and the remaining key features of this fortress are the ‘pin up gallery’ (a cave filled with paintings of topless women), a mirror wall and the paws of an enormous lion statue. The word ‘Sigiriya’ actually means ‘throat of lion’ and, at one time, you would have passed through the lion statue’s mouth to enter the fortress. 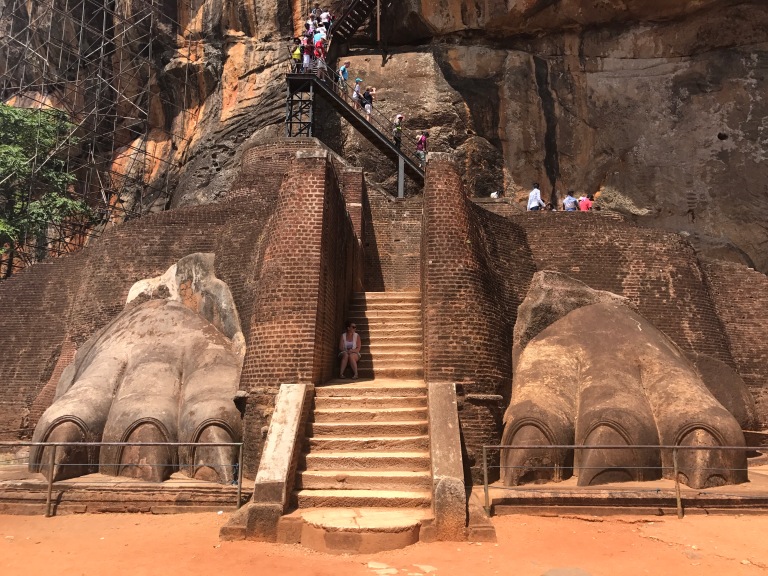 The views from the top of the rock were very much worth the climb – exhausted as we were. I don’t think pictures will do the atmosphere justice, but you can judge for yourselves. 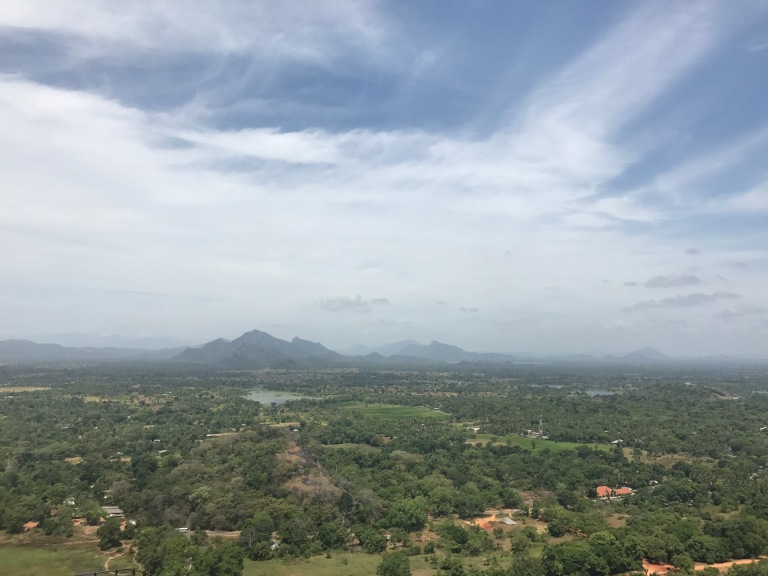 The second visit of the day was to the Dambulla caves, which were only 350m up; therefore, much easier than the Sigiriya climb. The series of 4-5 caves house different images and statues of the Buddha. We learnt to tell the difference between sleeping Buddha and resting Buddha (which is actually just a polite way of saying dead) from the positioning of his hands, feet and head and admired the many square feet of intricate and well preserved wall paintings. 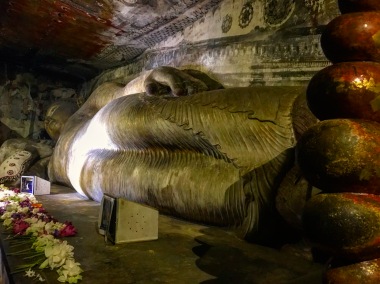 The trees planted around the caves are all said to be saplings from the original tree under which the Buddha found enlightenment. This is a highly religious place, so proper clothing is required (covered up legs and shoulders, no hats and no shoes). Visitors should also be respectful when taking photographs – no selfies with the statues or photos with your back to Buddha.

This was one of the many occasions on which I felt I was learning a lot about this ancient religion. Mansour pointed out that while Buddhism is classed as a religion, Buddha is not a God and people do not pray to him. In the case of the tree, this showed Buddha the way and so Buddhists would actually bring their prayers and offerings to the tree, so that they may also learn the way.

The next day we took a trip to Anuradhapura, which is one of the ancient capitals of the Northern Province. Anuradhapura is chock-full of archaeological goodies and, as we drove, Mansour stopped the minibus for various important sights, such as the ancient stupas in Jevanamaya. 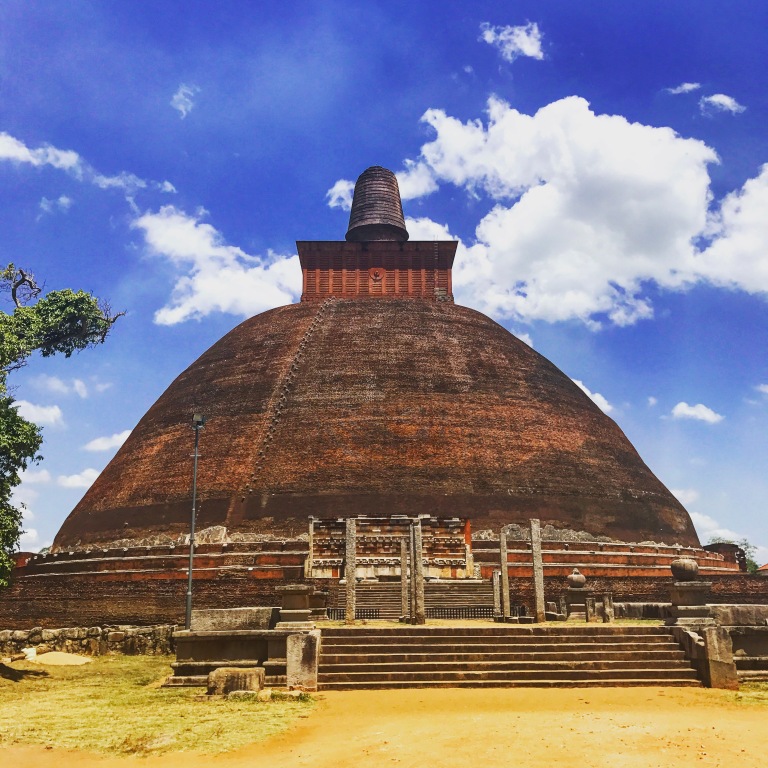 Jevanamaya is also a religious hotspot for Buddhism, as a temple here houses the oldest tree on human record. This is known as the Buddha’s tree (under which he was enlightened) and, although the original tree is in India, a branch from this tree was brought to Sri Lanka 2,000 years ago and planted.

We spent the rest of the morning moving around the various sites in Anuradhapura and, after lunch, we made our way to Minneriya National Park for the activity I had been most excited for… elephant safari! Long time readers will remember that I had an incredible safari experience during my trip to Botswana in 2015 and I have been itching to do it again ever since. To be frank, safari in Sri Lanka was not quite as exciting as it had been in Botswana, simply because they didn’t have the same range of animals in this particular park. However, seeing animals in the wild is always a blessing and it was still one of the main highlights of my trip. 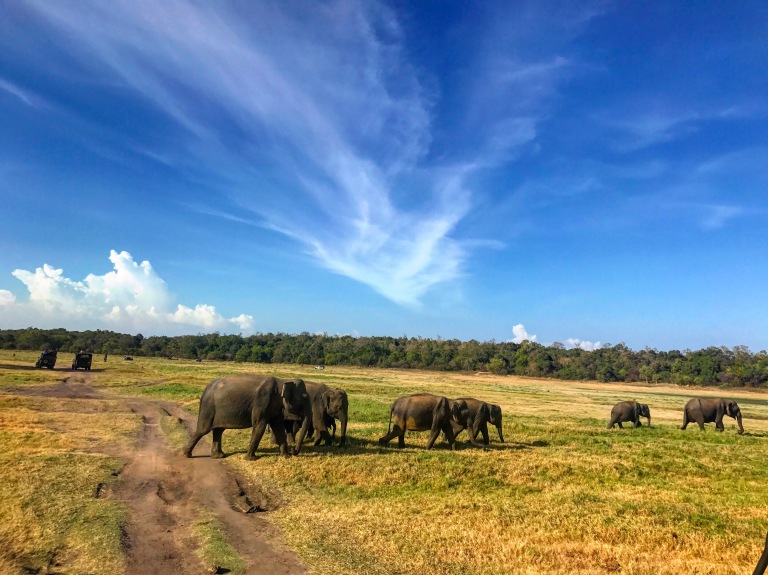 Each safari jeep can seat 5-7 people (including a driver) and our guide Mohan was very helpful in making sure we had the most informative and fun time possible.

Mohan told us that we were likely to see 50-80 elephants in the afternoon and explained the difference between the African elephants I had seen previously and the Asian elephants found in Sri Lanka. Asian elephants are smaller than their African cousins and they’re brown rather than grey. Minneriya National Park is also home to three different types of monkey, deer, lizards, birds and leopards (who rarely come out into the open).

The ‘game drive’ took around 2 hours and took us all around the park. However, the main location was around the 2,000 year old man-made lake, where all of the elephants come to drink before retreating back into the jungle.

Mohan was extremely knowledgeable and gave us lots of fun facts as he drove us around. He also threw in stories about some of the park’s more notable residents, such as ‘Ear Hole’ the angry elephant. When Ear Hole was young, he saw a baby elephant being hit by a car on the road. As the saying goes, an elephant never forgets and now when the rangers see Ear Hole coming, they make sure to avoid his path. He has been known to kick vehicles over in vengeance for his lost friend!

This was the perfect afternoon. The animals barely acknowledged our existence, which made for such an organic and natural experience, and the views of the national park in general were just beautiful. This is a MUST DO if you’re planning a visit to Sri Lanka!

On the fourth day of our trip, we paid a visit to the medieval capital of Sri Lanka, Polonnaruwa. This ancient city is a UNESCO World Heritage site, due to the number of ruined temples, palaces and statues which are preserved here. 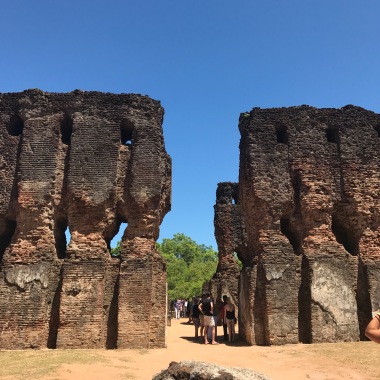 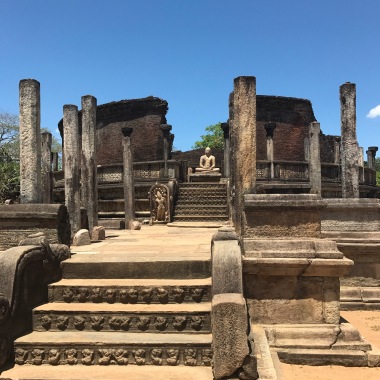 If you aren’t taking a guided tour of Sri Lanka generally, this would probably be a good day to get one. While the ruins were beautiful to look at, without Mansour, we probably would have been staring at things aimlessly without knowing what they represented or why they were there.

Going into a particular ancient temple in the complex was a treat for the senses; from the the distinctive sound of the Thammattama drums being played to the thick scent of jasmine offerings filling the air.

If you’re visiting this area, my random tip of the day would be to wear socks. You have to take your shoes off before entering any holy site and by the end of the day, the soles of my feet were totally sore and blistered from walking on the boiling sand and marble!

The best things we saw in Polonnaruwa, however, were the three enormous Buddha statues carved into the rock face in Gal Vihara (standing, seated and reclining). It’s kind of tricky to appreciate the scale from the photos below but they are MASSIVE and very much worth a visit. 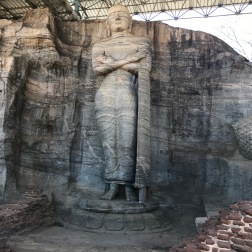 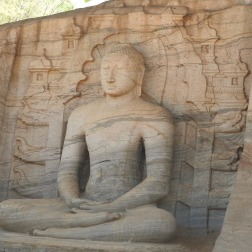 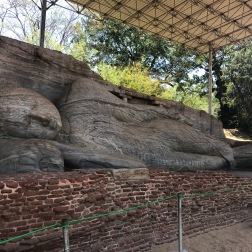 Leaving Polonnaruwa marked the end of our time in this particular region. Our next stop was Passikudah and the Maalu Maalu resort for some much needed beach time! Tune in next time to read about the second leg of the tour 🙂